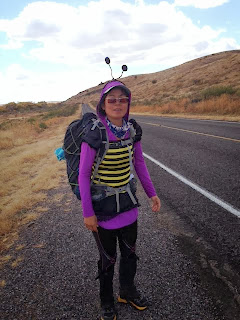 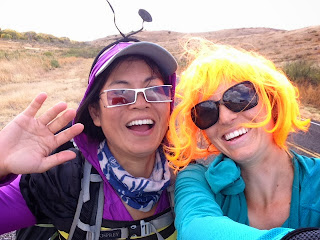 I'm starting to realize that the Gila was the last backcountry experience I will have on this trip. I have mixed feelings about this. On the one hand, as the weather gets colder, I'm ready to sleep inside. On the other hand, I do miss lolling around in open meadows, looking at mountains and mesas.

But the character of the trail has started to change. Due to zoning issues, the trail has ceased to follow the actual Continental Divide. As a result, the trails are mostly dirt roads patched together with short windy sections of trail. We're going to carve out our own route, and get to Mexico on an improvised route.

The terrain is yellow and dry, and the walking fast. The walking is tedious, since the terrain doesn't change much. Luckily, Gangles and Sky are nearby for company. Plus, we've decided to make this more fun. At Walmart, we acquired costumes and a portable speaker. Hearing music is a deeply emotional experience, after hearing very little (maybe a few songs a week) for five months. I could imagine that not hearing music would make you go crazy. I was brought nearly to tears hearing so much music from my sister's collection. Old school rock n' roll (Carl Perkins, Sam Cooke), jazz (Sarah Vaughn, Nina Simone, Dinah Washington), and some random hits from this century (Goldfrapp, last year's song of the summer). Plus, we downloaded some podcasts, most notably RadioLab, and listened to some thought provoking episodes on waste disposal, MIDI and the conundrum of blame and neurological abnormality in the the modern criminal justice system.

Music and external intellectual stimulation, two things I've missed on the trail. We're starting our re-entry into the civilized world.

Mileage: 29mi from San Lorenzo to dirt road
Posted by Steiner at 7:31 AM