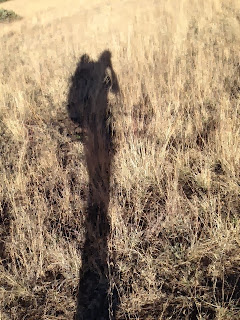 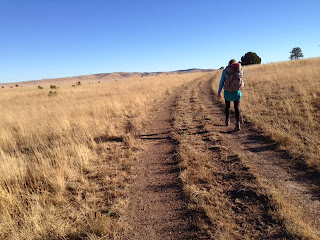 This year for Halloween, Gangles was a cactus, and I was a pincushion. We didn't go trick or treating, but we ate a lot of candy anyway. The trail is beautifully yellow, "amber waves of grain" if you will. The dry yellow grass is prickly, a mix of burrs, foxtails and thorns. The walking is itchy and scratchy (dangling Simpsons' reference).

The miles were strange today, and maybe an accurate microcosm of NM on the whole. We followed J. Ley to a tee, and covered ~28mi, which broke down into: ~22mi road, ~3mi trail, ~5mi bushwhack. Nita (of Toaster House fame) mentioned that as of 8-9 years ago, the CDT in NM was ~80% road. The percentage has declined, but still feels as though we're spending a lot of time on road, though mostly dirt and with sporadic traffic, which makes the walking easy.

We had a taste of the canyon bushwhack today, walking through T Bar Canyon to get to Snow Lake. This started off with a precipitous descent from a set of jeep tracks to a shallow, cow-befouled stream of water. We started off on a cow trail, which petered out, and we were bushwhacking along the water until we found another trail. The going was slow and arduous, requiring us to cross the water ever few hundred yards. The canyon also bore the traces of the huge flood in September, and was choked with debris and fallen trees. I would estimate that we were maxing out at 1.3mph. If this is a taste of the Middle Fork of the Gila tomorrow, we will be there all day, and possibly some of the next day. The Gila was especially damaged by flash floods, and accounts from other Sobos from this year suggest long stretches of washed out or non-existent trail, and brambles of boulder and tree fall.

We are going to look at using Wolf's suggested high route.

Camped at Snow Lake tonight, in the relative luxury of privies, trash cans, and potable running water. Feel as though we are living large with the latest amenities of the 20th century.

p.s., In true Halloween spirit, saw 5 tarantulas. All seemed purposeful, and probably off to some spider party.