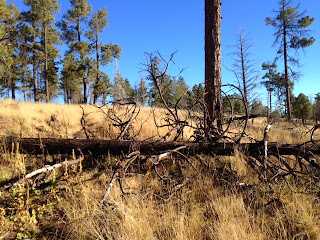 I stopped to take off my jacket around 10:30am, since it was warming up. Gangles went on ahead, and I was going to catch her in a few minutes. I passed a fresh cone of bear scat, mostly pinon nuts, but didn't think much of it. Two minutes later, I heard Gangles yelling, "STEIN!" Apparently, she had just seen a black bear. They surprised each other, coming around a corner. The bear took a quick look at her, and then took off, South on the trail. We waited a few minutes for the bear to clear out.

Later in the afternoon, we had patches of snow, groppel and hail. I thought we were past the bad weather, but I suppose we procrastinated too long at the Grand Canyon. Strange to see snow on the cacti and other desert plants here. It's quite cold now, supposed to hit 19 degrees in Pie Town, so maybe single digits tonight as we're on the divide. Camped early, since it was so cold. Hope to catch Sky tomorrow at Snow Lake.

Really cold, ready to be done